Cockpit is the modern Linux admin interface. There’s a new release every week. Here are the highlights from this weeks 0.100 release. Even though 0.100 may seem to be a magical number … it’s really just the number after 0.99 :D

Cockpit can now help you troubleshoot SELinux problems, and show you fixes for repairing the various issues. This is pretty amazing for system admins who really would rather be secure, but keep bumping into stuff that SELinux is blocking. There’s more to come on both SELinux and troubleshooting in the future. Take a look at what landed in this release:

There’s a new Image Registry user interface. It works with Atomic Platform or Openshift clusters. By default this shows up in the Cockpit “Cluster” admin dashboard.

But more importantly you can deploy this as a standalone image registry, complete with storage, authentication and an interface. See www.projectatomic.io/registry for more info.

Marius has been working on cleaning up the storage UI. One of the changes you’ll notice is that you can now use a slider to choose a size for new volumes or file systems, and specify the size units you want to use:

Peter worked on adding Cluster storage configuration to the Kubernetes admin dashboard. Basic support will be in the next release. Here’s a screenshot: 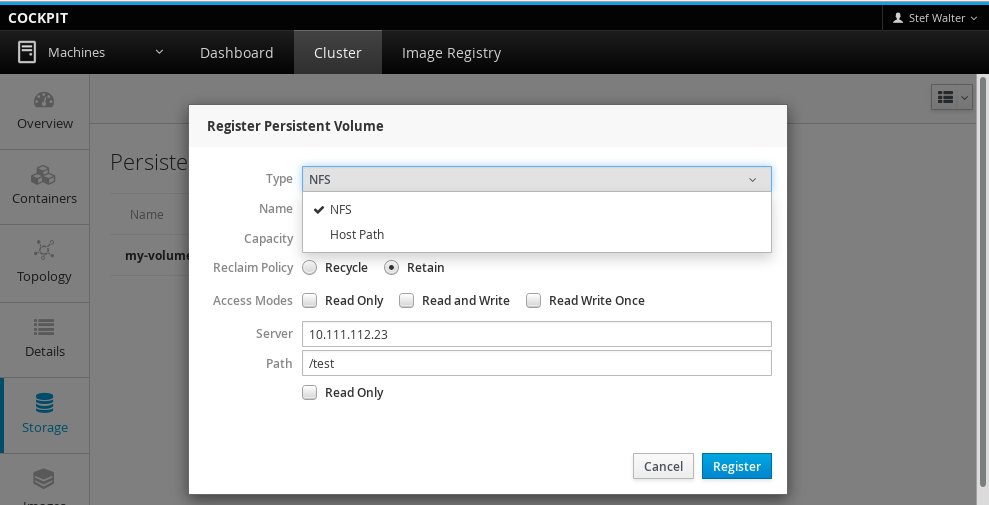